Icon and surf trailblazer Shane Dorian is a legend not only for his big-wave skills but also for his influence on the sport, the culture—and the next generation.

Shortly after Hawaii became a state, Shane's father moved to Hawaii, and Shane grew up on the Magic Sands shores of the Big Island in front of his parents' restaurant. His childhood was filled with spearfishing, diving, bodyboarding—and surfing.

"For my 5th birthday, my dad had one of his old surfboards from California cut in half and reshaped, and then he gave it to me for my birthday," Shane says. "And so I started surfing, and I fell in love with surfing."

Shane began competing and short-boarding around age 10 and got his first sponsorship from a former Surf Vibrations surf shop in Kona when he was a pre-teen, where he found nurturing and mentorship among the local network of peers and uncles and mentors.

"Surfing for me was important in a lot of different aspects of my life,” Shane says. “At the start, it was for fun, then growing up, my parents went through a rocky time ... and at that point, surfing went from just fun to a safe space to something that sort of saved me."

From Oahu to World Tour

After moving to Oahu when he was 15, Shane immersed himself in bigger waves and experienced the challenge and power of the North Shore.

Shane spent 11 years straight competing on the World Tour, traveling the globe and seeking the World Title. But he kept feeling a pull to his passion and his best surfing: the big waves.

With waves reaching up to 80 feet high and speeds of around 50 mph, big-wave surfing has become one of the stars of the surfing world for its breathtaking rides.

But when Shane left the pro circuit to focus on the giants, there was no big-wave tour and no path to follow.

"When I went in [to my sponsors] with a full treatment and paragraphs and bullet points and here’s my three- to five-year plan, I didn’t have a single name on there to be like, 'hey, I wanna do what this guy’s doing.' There was no pathway; there hadn't been a person who had gone the direction I wanted to emulate,” Shane shares. “At the time, what I wanted to do was really unprecedented. So I was stoked that my sponsors, and it was a leap of faith on their part, believed in my vision and what I wanted to do.”

That vision led to the first-ever career as a big-wave surfer, a part of the sport that is now one of the most renowned. 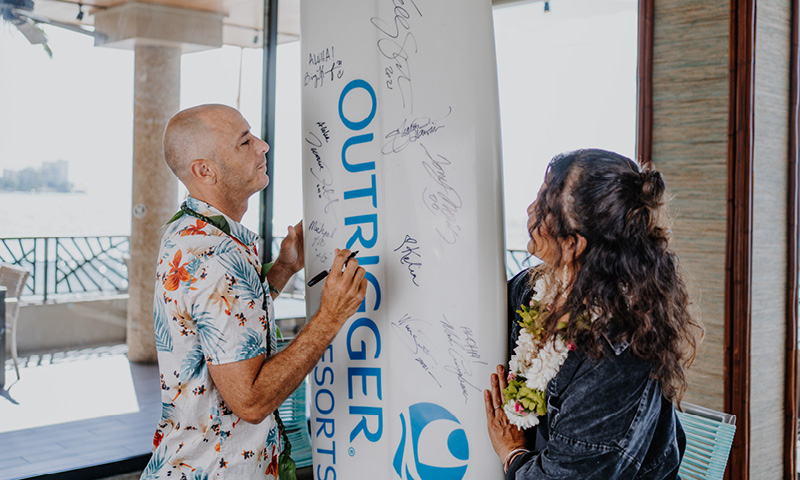 Blazing a new trail started even before Shane’s big-wave journey. When he was 21, he founded the Shane Dorian Keiki Classic, a competition at Banyans on the Big Island dedicated to bringing groms together with The Goat(s).

The event is free to enter and gives back to Big Island Giving Tree. This spirit of sharing with the next generation all over the world is something Shane is as passionate about as the waves themselves.

"Whether you're a kid from Sumbawa, Indonesia or in France or Portugal or in Africa or Hawaii, it's kind of a level playing field …" Shane says, “Whether you’re a certain skin tone or a certain gender or where you live, it doesn't matter. If you absolutely are passionate about surfing and have the ability, you can be the next whoever. And that's super exciting, right—there's no barrier of entry for surfing. Save up a few bucks and get a surfboard and have swim trunks, and you're good to go."

Make Your Own Waves

As Tammy says, Shane’s loyalty and love for the sport shines through, and he’s a role model for the next generation—including her son.

"[Before he was on the pro circuit], my son Seth was asked by one of the magazines ‘who's your favorite surfer,' and he had said you,” Tammy says. “And I said why did you choose Shane, and he said, ‘Because he competed at that level of surfing with so much respect, and then he did his own thing ... he did it his own way.’"

Check out other great Surfers in Residence interviews with everyone from Kelly Slater to Carissa Moore. Come make your own waves in Waikiki with a stay soon!